Recently, I helped a friend design and install his rainwater harvesting system. This was made much easier by my recent experience in Tucson, Arizona. The water harvesting certification from Watershed Management Group was filled to the brim with knowledge, and math. But I digress… 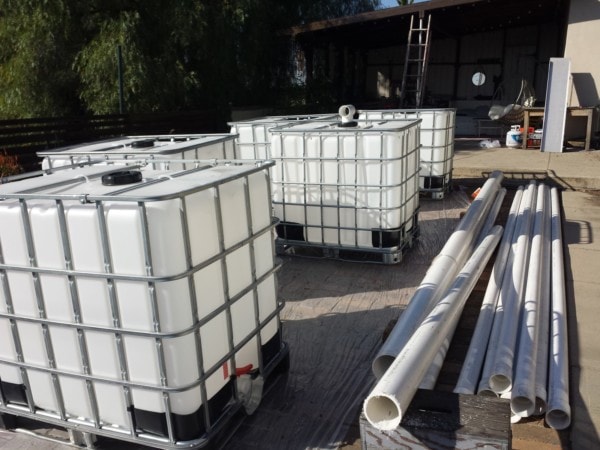 So, my friend Mike contacts me and asks if I would talk rainwater harvesting with him. You can guess what I said, I’m sure. Several hours, beers, and napkins later we came to this. 5 IBC totes (he wanted to use these because of future plans for a deck above) several hundred feel of 3″ PVC pipe, some 4″ PVC, and a 6″ PVC length for building the most awesome first flush ever! More on what a first flush is later… 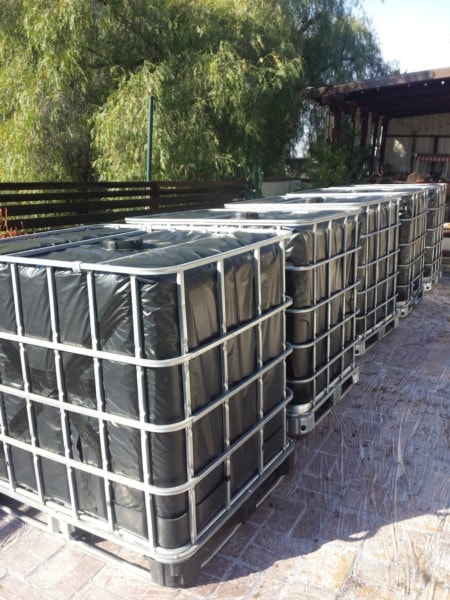 Any container for water, be it, a cistern, rain barrel, or IBC tote, needs to be light proof. Meaning, no light can get into it. This is because if light does get in, you are guaranteed the very unrewarding job of cleaning up algae from the container. With these, we decided to go with 6mm thick plastic. We first removed the IBC totes from the cages and then wrapped them up nice and neatish. 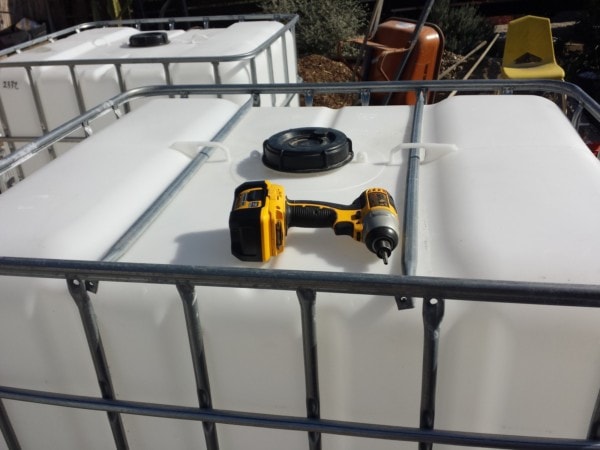 Something to note, if you ever decide to do this, is the need to cut the top tabs that hold the cage to the plastic. Otherwise, no mastery of wrapping will save you.

The  three photos above are examples of a first flush system. The water from the gutters goes to a Rain Head. This has a mesh that catches most large debris, such as leaves. From there, it goes down to the capped pipes. When these fill up, it then goes to the IBC totes. That is the first flush! Your roof collects a fair amount of contaminants, such as dirt, bird droppings, and such. When it first rains the first flush catches this dirty water and there for “flushes” the roof.

The two images on the left show what a wet system looks like. Basically, the water leaves the first flush and goes into the collection pipe. This, however, is lower than the top of the tanks. What happens is the pipe fills and the water rises up, or levels, on the other side. Permitting it to go into the tank. Not the easiest thing to explain, I know.

The vertical pipe on the left of the first image, and the vertical one on the right of the second, are the other end of the wet system collection pipes from the previous images.

Here, you also see the smaller 2″ pipes that connect all the IBC totes together and where the water will, eventually, be released to the landscape. We decided to use “no hubs”, the black couplers with clamps, so as to be able to detach and service all the parts.

All in all, this was a really fun project and the IBC totes have a total capacity of 13750 gallons. Which will last this landscape through the dry season and then some.

Water, drought and what I’m doing about it

Water, drought and what I’m doing about it