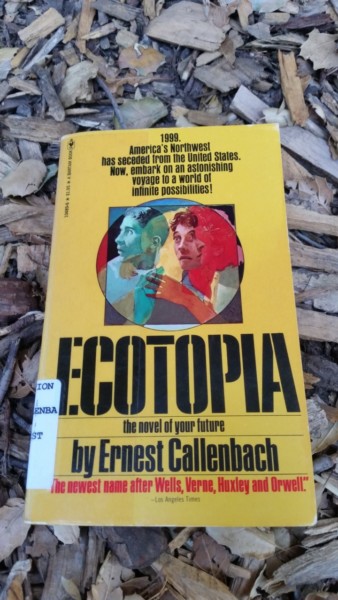 I recently finished reading Ecotopia, by Ernest Callenbach. Been hearing about this book for a while now, mostly from people deep in the trenches of the sustainability movement. Now I see why there was so much talk about it. Ecotopia’s namesake is a fictional country formed, in 1980, after America’s Northwest secedes from the United States. As the name suggests it’s an ecological utopia. The story takes place in 1999 and follows William Weston, a writer for the NY Times, as he travels to Ecotopia on assignment. He is the first official visitor from the United States since Ecotopia secedded.

There, he discovers some of the ways in which this new nation differs from the United States:

It’s an interesting window into some very creative ecological ideas and ways of living. Some of which have come to fruition, others might take a bit longer, and some are just wild! All the same, a great short read standing at 213 pages, it’s a good page turner for sure. I’ll keep this short because I don’t want to give ALL the details of the story. So, hit up your local library, give it a whirl and tell me what you think.

1. How to (and not) properly season cast iron pots

Is the Universe trying to tell me something?

1. How to (and not) properly season cast iron pots

Is the Universe trying to tell me something?